It seems with the current focus on mathematical content, we have forgotten that play is critical for childrens' learning. Our session explored how to support the development of young mathematicians through purposeful play. We used manipulative-based games with a focus on the Standards for Mathematical Practice and the content domain of Number & Operations in Base Ten, including number sense, computation, and estimation. Let's bring play and creativity back into our classrooms!

A big thank you to ETA hand2mind for sponsoring this presentation! We were able to give away all of the manipulatives they provided for this session!
Posted by Literacygurl at 11:20 AM No comments:

Today Dave and I presented at the National Council of Teachers of Mathematics Annual Conference in San Francisco. We were most fortunate to be joined by three Grand Valley State University elementary teachers in training. Our presentation focused on finding opportunities to support the development of the Standards for Mathematical Practice with math games as a shared context between teachers and students. 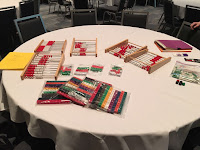 In our session, participants got hands-on practice playing some simple but challenging math games.


Lauren, Megan, & Kaileigh shared some their research around the Mathematical Practices from a GVSU Department of Mathematics capstone project with our participants.


Here is a PDF of the session PowerPoint, which includes links to resources and a list of materials needed for each game. Click here to download the procedures and any of the game boards/hand outs that do not have a copyright.

We also want to shout out a big thanks

to ETA Hand2Mind for their support by providing manipulatives for our presentation!
Posted by Literacygurl at 4:49 PM No comments: